In a week in which the New Milton Table Tennis Club could only muster three wins out of their ten matches in the Bournemouth and District league, the E team slipped off the top of Div 2. They were held to a 5-5 draw by Ringwood A at Greyfriars whilst Bmth Sports F took Milton’s place with a 8-2 maximum pointer over Merton F. Although only separated by superior games difference on 50 points apiece, Bmth Sports F have a game in hand as do third-placed Merton E (49 points) who beat New Milton D by 7-3 at Southbourne.

The best of the club’s wins came in Div 2 as the C team did the double over lowly Lynwood C, this time with the improved scoreline of 9-1. Captain Dave Cuddon and Matt Winter (pictured below) both scored hat-tricks, but Malcolm Floyd just missed out on his own treble as he lost 12-14 in the fifth and final end against his old nemesis Melvyn Gregory. 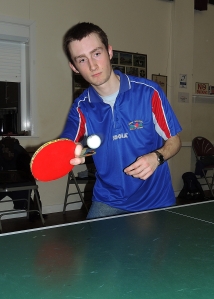