NMTTC TOURNAMENTS – THE STORY SO FAR

Next up was the Ladies Handicap Tournament which also took place at Arnewood School. Four ladies took part in this event (Fern Daish, Angela Farmer, Julie Smillie & Sylvia Smith), the first time for years that the club has run a “ladies only”. Angela Farmer playing off +25 won the group by beating Julie (+13) and Fern (+23) in straight sets, only losing to Sylvia (+20) over three sets. Julie also won two by beating Sylvia and Fern, but Sylvia took a set off Julie who therefore had to settle for runner-up. Julie will try to exact her revenge over Angela in the final. 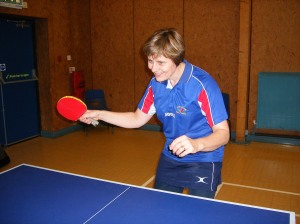 The club would love to have more lady players and were really pleased to welcome Angela back after an injury. Any ladies wishing to join our very friendly club should call Julie Smillie on 01425 614784 or club secretary Bev Scott-Johns on 01425 619552.

And then it was the Under 40s Handicap Event down at Mudeford Wood Community Centre in which eight members took part, five of whom were from the Daish family. Matthew playing off +12 was drawn in the same group as elder brothers Peter (+19) and Andrew (+21) as well as a Thai student known to all as “PJ” who was given a handicap of +9. PJ overcame his handicap to emerge as group winner, only losing to Matthew Daish who came runner up.

The second group of four comprised Lucy Craddock and Andrew Stainton, both playing off +25, Simon Daish (+18) and Fern Daish (+23). Simon won all of his matches to win the group including a victory over big sister Fern who eventually went through as runner-up. The semi-finals first saw Matthew Daish get the better of older brother Simon, and then Fern faced PJ. Fern just lost the first set 30-32 but really got her forehand attack going to take the next two 31-25, 31-23 to face little brother Matthew in the final.

The remaining events (Vets Over 40s, Handicap Singles, Doubles, Scratch Singles) will be played out over the next few weeks, culminating in the Grand Finals Night at Mudeford Wood on Monday 24th June.