Veteran table tennis player Brian Bickell, who plays for England as a member of the VETTS (Veterans’ English Table Tennis Society) established in 1984, has recently returned home with a gold medal. It was won in the team event at the 4th International Table Tennis Team Championships for Veterans Societies, held this year in the UK at Tipton Sports Academy, Wolverhampton, June 28-30. Germany gained silver and Australia bronze. This is the second time Brian has won a gold medal when selected to represent England playing for the VETTS, the previous victory being in Istanbul in 2011. Selection is based on players’ national rankings. 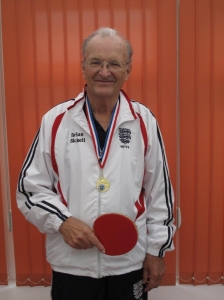 Brian’s interest in table tennis, as a member of the VETTS, has taken him literally world-wide, including Japan and Canada, plus numerous European countries (Czech Republic, Slovenia, Croatia, Sweden, Norway, Germany). Brian plays for the New Milton Club A team in the Bournemouth & District Premier League and also supports the Ringwood and Merton clubs. He plays twice weekly but says, “I would play eight days a week, but there are other things in life!” It was as a seven-year-old, evacuated in WWII with his elder brother to their grandparents’ home in Glossop, Derbys, that he was introduced to table tennis, being lucky to play on a full-size table in a pavilion at the bottom of the garden.

He says there are usually three distinctive playing styles – attacking, defending and a combination of the two, the last being Brian’s choice. Of last month’s success he was amused to notice the German team closely monitoring his method of play, to identify his all-important “magic” – and any possible weaknesses – but obviously to no avail!