Following a week’s break for the Times and Directory Cup Handicap Cup competition, the New Milton Table Tennis Club came up with three wins out of nine in the Bournemouth and District league. One of these wins came as a 10-0 gift to the F team in Div 3 as Bmth Sports K were unable to put out a team.

The L team won their first match of the campaign against Winton YMCA G (6-4) and leap-frogged over them to get off the bottom of Div 5. Richard Brockbank came up with his first ever league hat-trick and then joined with 14 year old Andrew Stainton for the doubles which they needed for the win. They took the first two ends but lost their way a bit and lost the next two to set up a delicately poised finale. The Milton duo had the scent of a maiden victory in their nostrils and just shaded a nail-biting fifth end by 13-11 to take the laurels.

Milton’s only other win and hat-trick came in Div 2 as the C team beat Merton D 7-3 at Mudeford Wood Community Centre. Matt Winter got injured which meant that Malcolm Floyd (pictured below) had to play his final two singles straight off after helping Dave Cuddon to win the doubles. Floyd didn’t disappoint as he disposed of Merton’s Stewart King and Pete Hodson in three straight ends having already seen off King’s son Andrew without dropping an end. 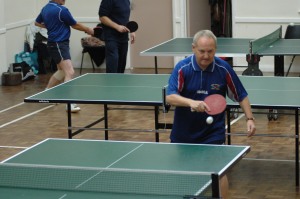 Full results details are below: