The New Milton Table Tennis Club’s teams returned to action in the Bournemouth & District league after the Christmas break and could only muster one win out of their eleven matches. Even that win came at the expense of one of their own teams as the E team beat the C team in the second of their local derbies.

The Nimrod club lived up to its biblical name as its three teams did the collective double over Milton’s H, J & K teams, only dropping one point in the process.

However, some good individual performances shone through the gloom as hat-tricks from Simon Golding and Mike Roberts helped rescue a point for the G and J teams respectively, and Ian Linney’s treble helped secure a draw for his F team. The unbeaten Gerard Redman’s treble helped his E team assume bragging rights over the C team as they improved on their first round draw with a 7-3 win over their club mates.  A photo of Gerard, a veritable study in concentration, appears below: 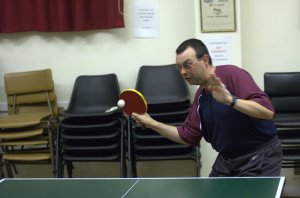 Full results details are below:-

New Milton A 4 Bmth Sports B 6

Broadstone A 6 New Milton B 4