Twenty seven members and guests of the New Milton Table Tennis Club attended the Annual Presentation Evening of the Bournemouth and District Table Tennis Association at the Ocean View Hotel in Bournemouth, and witnessed a number of club players receive their trophies from special guest Alex Perry. Alex is a former England No 1 player with an impressive list of top level titles. He has England National titles in Singles, Men’s Doubles 4 times and Mixed Doubles 7 times. A gold medal at the Commonwealth Games with the England Men’s team and Gold Medals at the Commonwealth Table Tennis Championships are just some of the honours achieved at international level.

After an excellent meal, Alex Perry gave a truly inspirational speech and then proceeded to present the trophies under the watchful eye of Association General Secretary Gordon White. First up for the New Milton Club were Matthew Daish and Phil Handy who picked up the Times and Directory Handicap Cup runners-up trophy on behalf of the A team (their plan didn’t quite come together!). Matthew had to return to the front a bit later to pick up his Junior Under 15 winner’s trophy.

Shaun Newcomb (B team) was summoned to receive his trophy for winning the Vets 50+ title, and Kai Major (H team) proudly collected his Junior Under 13 winner’s trophy. Gerard Redman (E team) picked up his runner-up trophy for the Bournemouth Closed event and Club Secretary Bev Scott-Johns collected the Division 2 runner-up trophy on behalf of the C team’s Dave Cuddon who was unable to attend.

A huge cheer went up from the New Milton table when it was announced that Club President Bob Fagan had won the prestigious Elsie Carrington Trophy for Sportsmanship. Bob, who was there with proud wife Sandy, joins the pantheon of club members who previously received this accolade, namely Julie Smillie and Shaun Newcomb. Bob always comes smiling through each table tennis match, regardless of how many “nets and edges” go against him, and quickly apologises for those that go for him. Win or lose, Bob is always the same, with a firm and friendly handshake after every match.  A delighted Bob is shown receiving his well-deserved accolade from Alex Perry. 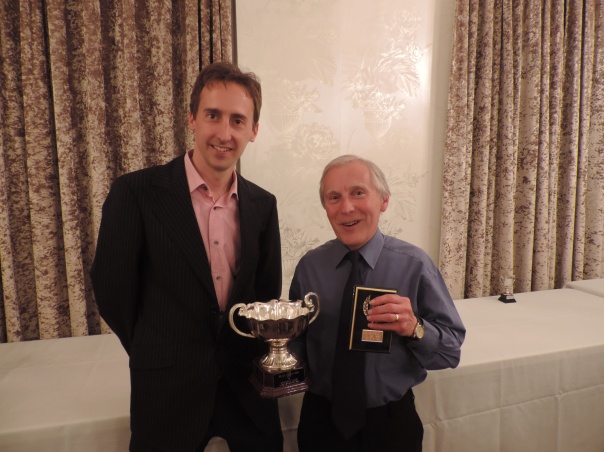 Association Chairman Phil Hadley congratulated the winners and runners-up, and thanked the organisers of the Presentation Evening and the Tournament Organisers and Umpires. In that heady company was County Umpire Andrew Daish from the New Milton Club, and Club Secretary Bev Scott-Johns who gained his County Umpire spurs at the tournament finals night. League Results Secretary and Club Treasurer Malcolm Floyd was also thanked for the major part that he played in the production of the Association Annual Newsletter “A League Of Our Own”, copies of which were placed on every table. All in all, a very good evening for the New Milton Table Tennis Club.

Pictured below are Phil Handy & Matthew Daish receiving their Times and Directory Runners-Up trophies, then Matthew proudly displaying his Junior Under 15 cups.

Shaun Newcomb looks rather pleased with his Vets 50+ cups, as does Kai Major with his cups for winning the Junior Under 15 title. 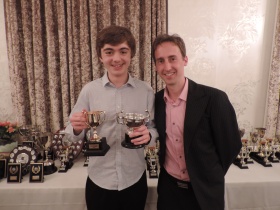 And last but not least is Gerard Redman receiving his runner-up trophy for the Bournemouth Closed Event.