The New Milton Club had its best week so far in the Bournemouth and District League this season as its teams won five out of ten matches, three of them being maximum-pointers. It was also a week in which no less than eight of the club’s players came up with hat-tricks, which is the highest tally of trebles so far this season.

In Div 2 the E team hammered Bmth Sports E 9-1 down at the Grange. Captain Frank Handy led from the front with his second hat-trick of the season and Andrew Daish followed suit with his first ever league hat-trick. Daish’s younger brother Peter was unlucky not to join his team mates in a treble as he lost over five ends to Bourne’s Arthur Bartram having won the first two ends but losing the third 11-13.

The club’s other 9-1 victory came in Div 3 as the G team demolished Nimrod A at Mudeford Wood courtesy of hat-tricks from Simon Golding and Simon Daish, the latter’s first full-house in over three years.

The C team were promoted to Div 1 from Div 2 last season and have really struggled to find form having lost their first four matches including two whitewashes of late. Putting all that behind them, they beat Merton D 8-2 in their own back yard courtesy of hat-tricks from captain Malcolm Floyd and Matt Winter. The doubles were needed for the precious four points and Winter partnered Julie Smillie to duly oblige. Across the court from their C team, the D team’s Terry Jenvey put in an excellent captain’s performance as his treble helped his team hold Merton F to a 5-5 draw in Div 2.

The F team’s Ian Linney (pictured below) was due to go into hospital for a Hip Replacement Operation three days after his match, but you wouldn’t think so as he played like a veritable spring chicken to get his first hat-trick of the season. 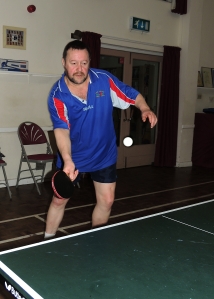 The J team’s Lynn Willrich came ascloseasthis to recording her first hat-trick of the season in Div 5 but it wasn’t to be as she lost over five ends in her last singles against Bourne’s Steve Chizlett. Lynn was 2-1 up in the third but lost the next two ends 11-13, 12-14 as it slipped from her grasp– so near yet so far!  Full results are below:-

New Milton B 4 Broadstone A 6