The New Milton Table Tennis Club signed off the first half of the Bournemouth and District league with two excellent wins which unfortunately came at the expense of their own teams in two local derbies.

The bigger win came in Div 3 as the G team whitewashed their F team 10-0, courtesy of hat-tricks from Simon Golding, Clive Pitts and Danny Williams.

Up in Div 1, it was a “Clash of the Zoltans” as the B team hammered their C team by 8-2. The B’s Zoltan Karip-Barath won 2, including a fairly comfortable win over fellow Hungarian Zoltan Ordog, and Shaun Newcomb joined him in a brace. England veteran Brian Bickell came up with his fourth hat-trick for his B team by beating Ordog, Julie Smillie and Matt Winter. Once again Smillie (pictured below) proved to be Newcomb’s bogey player albeit it by 11-9 in the fifth end, and she also beat Karip-Barath to amass the C team’s only two wins. The doubles would have earned a precious point for the C’s, but it wasn’t to be as Smillie and Ordog lost out over three high-scoring ends to the very tricky combination of Bickell and wheelchair-player Newcomb. 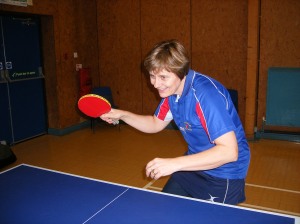 Div 2 saw thirteen year old Kai Major come up with his fourth hat-trick of the season, but his D team still lost 4-6 against the high-flying Broadstone B down at Mudeford Wood.  Full results details below:-