MATT & KAI FACE EACH OTHER IN FINAL (BDTTA INDIVIDUALS)

Two weeks of the Bournemouth and District Table Tennis Association’s Annual Individual Championships got underway last week and three New Milton Club players have already made it through to four of the finals.

There will definitely be a “matt finish” in the Premier final as 14 year old Milton player Matt Daish will take on Matt Rogers from the Bournemouth Sports Club. This is Daish’s first tilt at the Premier title having lost in the semis last year to the eventual winner Steve Foster (Bournemouth Sports). Daish, who won the group without dropping a match, can take encouragement from the fact that he beat Rogers in three straight sets in the group stage, but anything can happen on Finals Night.

Daish also features in the Under 15s final where he will defend his title against fellow 14 year old club mate Kai Major who plays in Div 2 of the league. Daish beat another Milton player in the semis, Elliott Storr-Smith (Div 5), and Major saw off Ali Malloch from Bournemouth Sports who usually plays in Div 3. Major is out for revenge against Daish who beat him in their semi-final of the Under 15s last year. We are assured of at least one title winner from the club this year! Kai is pictured below receiving his Under 13s Trophy last year but he was “too old” to defend his title this year. 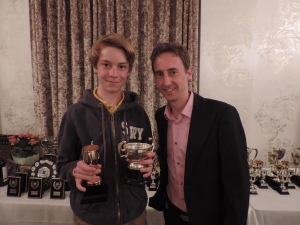 Major’s second title bash is in the Bournemouth Closed Handicap event where he takes on Keith Gillison from the Shamrock club. Gillison usually plays in Div 5 so Major from Div 2 will have to overcome a tough handicap to earn the title. The Milton starlet already overcame a handicap of +7 to beat Christine Renaut (Merton) in their semi, but he will have to give a +10 start to Gillison although Major has the consistency of play to surmount it.

The other New Milton player to make it through to the finals is Club Chairman Steve Hemmings who will face fellow Premier player Norman Swift (Merton) in the prestigious Bournemouth Closed (Scratch) event.

A number of New Milton players will also be entering the second week of tournaments including Vets and Doubles so hopefully there will be some more finalists from the club.

The Finals Night is on Friday 20th March at the Grange starting at 7 o’clock, so come on down to cheer on your club mates.