NMTTC GOES FROM STRENGTH TO STRENGTH!

The New Milton Table Tennis Club recently held their combined AGM/Presentation Evening down at the Mudeford Wood Community Centre at which Secretary Bev Scott-Johns hailed the past season as probably the best ever for the club.

Out of 10 teams entered in the Bournemouth and District League, two gained promotion having won their respective divisions, ie New Milton E (Div 2) and New Milton G (Div 3). The B team were unlucky not to win promotion to the Premier League having been pipped to the post by Bournemouth Sports D on games difference to end up in third place. Unfortunately two teams were relegated, the F team from Div 4 and the C team from Div 1. The D and G teams reached the semi-finals of the Times & Directory Handicap Plate competition with the D team going on to win the Plate.

Bev reported several successes in the Bournemouth and District Annual Individual Championships. Fourteen year old Matthew Daish came away with three titles, the Premier, Junior Under 15 and Junior Under 18, and at the other end of the age spectrum, England Veteran Brian Bickell won the Vets 70+ title. Julie Smillie won the Ladies Singles and joined with Shaun Newcomb to take the Mixed Doubles title. Another fourteen year old, Kai Major was awarded the prestigious David Woodcock Trophy for the Most Improved Player in the league.

Bev hailed the move to the Dorset Table Tennis Centre (Grange School, Somerford) as a great success and pointed out that a number of new members has been attracted to the enhanced facilities. The club moved to the Grange from Sway Village Hall and Arnewood School at the start of the season, but continues to use the Mudeford Wood Community Centre for League Matches, Club Tournaments and occasional Club Nights.

Club Treasurer Malcolm Floyd presented the annual accounts which showed the club to be in a very healthy financial position. This meant that the fees did not need to be increased for next season despite the BDTTA increasing their team registration fees.

With the official business out of the way, Club Vice-President & Development Officer and Past Chair Shaun Newcomb presented the club’s annual trophies, ably assisted by Club Chair Steve Hemmings. After presentation of the annual tournament trophies (full listing below), the winners of the two annual discretionary trophies were announced. The James Lewis Shield for Most Improved Player went to Danny Williams by unanimous decision of the Management Committee. Danny showed that this award is not the sole preserve of the youngsters as he is one of the club’s players of maturer years. Danny has been on a steadily upward curve since joining the club (he didn’t even want to play in the league to start with and had to be bullied into it!) and has worked his way up through the divisions. A tenacious hard bat specialist, he played up a division this year in Div 3 but still maintained his winning average of around 53% and helped his G team to win the Div 3 title. Unfortunately Danny wasn’t present on the night to receive his award so here is a picture of the man himself in action. 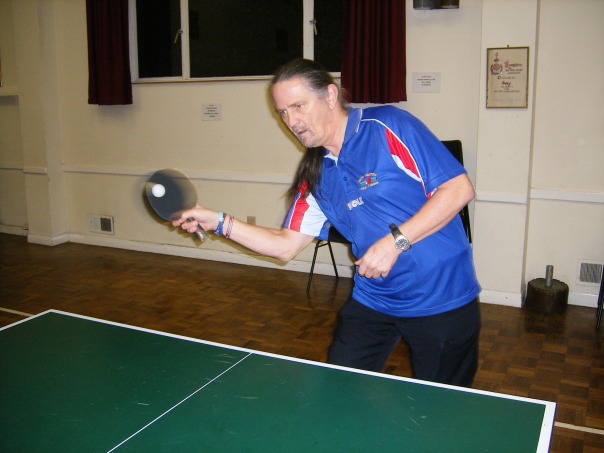 The remaining award was the Doris Marshall Memorial Plate for Club Person of the Year. Before announcing the winner, Shaun said that this is always a hard one to call as there are a number of very hard working committee members worthy of this award. However, again by a unanimous decision this accolade went to club chair Steve Hemmings this year. Steve only took over the chair from Shaun Newcomb this season but successfully led the club through its transition to the Grange and provided excellent leadership in his first year. A very busy man with heavy business and family commitments, he always finds the time for club business, and is very approachable.