SIX OF THE BEST FOR NEW MILTON (WEEK 2 RESULTS)

The New Milton Table Tennis Club improved on their two wins from the opening week of the Bournemouth and District league by winning six out of their ten matches in Week 2. The A team who had a bye in the opening week got their Premiership campaign off to a brilliant start with 9-1 drubbing of Broadstone A in their own back yard. Captain Steve Hemmings and Brian Vibert (pictured below) scored hat tricks, pairing to win the doubles, and excellent new signing Doug Gerrish bagged a maiden brace. 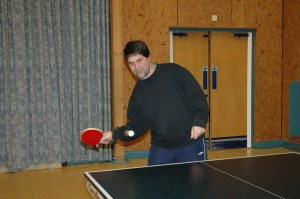 The newly promoted E team completely reversed their opening week defeat in Div 2 with a 7-3 win over Broadstone C, courtesy of hat-tricks from Peter Daish and Simon Golding. New Milton have three teams in Div 4 this season and the happy triumvirate all recorded wins. The most emphatic came from the H team who whitewashed Winton YMCA C 10-0 thanks to hat-tricks from Lynn Willrich (captain), Dave Strike and promising new signing John Childs. In Div 5, the K team were gifted three games and a point as Shamrock C turned up a player short at the Grange. Captain Stuart Burton, James Harper and John Parkhouse all beat Shamrock’s Lori Ryder to win the match 6-4 and secure the precious three points.

Broadstone A 1 New Milton A 9