A TEAM ARE RUNNERS-UP IN THE PREMIER! (FINAL WEEK RESULTS)

In the final week of the Bournemouth and District Table Tennis League, the New Milton A team secured runners-up spot in the Premier thanks to an 8-2 maximum points win over Bournemouth Sports B. Teenager Matt Daish (pictured below) scored his fifth Premier hat-trick and Doug Gerrish and Brian Vibert bagged a brace apiece. The last time Milton took second place was back in 2010/2011; this season the squad benefited from excellent new signing Gerrish and the homecoming of Russell Wilson. 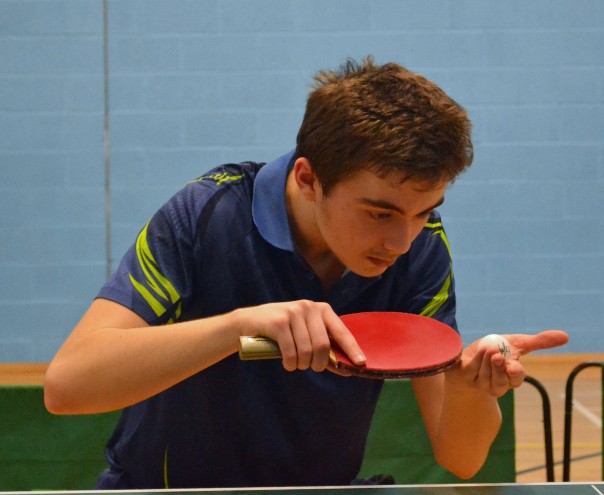 Milton’s B team rubbed it in to their A team’s closest rivals, a depleted Merton A team, by beating them 8-2, although by then the A team had already landed second spot by their own devices.

Going into the final week, the F team had already clinched the Division 4 title, but hammered home their credentials by beating second-placed Bournemouth Sports K 7-3, having only drawn against them in the first round. Steve Cheesman and Mike Roberts rounded off an excellent season with a treble apiece.

Also in Division 4, the H team did likewise to Nimrod B, their own 7-3 victory pipping their victims at the post to take third place. Paul Iliffe did his bit by scoring his ninth hat-trick out of eleven matches in his maiden season.

Division 5 saw the J team gifted a point and three games as close rivals Nimrod C turned up a player short at their own venue. Captain Malcolm Douglas and Mike Gent added to the advantage by beating Chris Courage and Mike Melaniphy, both ex-Milton players, and Richard Brockbank also took Courage. Full results details appear below:-

New Milton A 8 Bmth Sports B 2