← G TEAM WIN DERBY TO GO THROUGH TO PLATE FINAL
IT WAS ALRIGHT ON THE NIGHT FOR NEW MILTON PLAYERS! →

For the second year running, a team from the New Milton Table Tennis Club had reached the final of the Annual Times & Directory Handicap Plate competition. Last year it was won by their D team (Terry Jenvey, Chris Pusey & Kai Major), and this season it was the G team (Eddie Tompkins, Graham Underwood & Lewis Reading) seeking to keep the Plate within the club.

The Gees had already seen off their own B team in the semi-final, and their opponents Merton H (Simon King, Rob Searle & Christine Renaut) had done likewise to their own club mates in the Merton D team. The New Milton side usually ply their trade in Div 4 of the Bournemouth and District league whereas Merton play in Div 3, both teams ending up mid-table.

Merton needed to win the next match to stay in the final, and Searle duly obliged by just getting the better of Tompkins 21-16, 17-21, 21-19. Milton started to get the jitters as Renaut saw off Reading in two straight ends 21-19, 21-19 to level things off at 4-4. The decider was between Underwood who was looking for his hat-trick and King who had lost both his matches, but Milton weren’t counting their chickens as King had only just lost out to Tompkins. Underwood starting off +5 quickly pulled away in the first end to take it comfortably 21-9 and won the second 21-14 to secure the Plate for New Milton.  The victorious G team are pictured below (l-r Eddie Tompkins, Graham Underwood & Lewis Reading):- 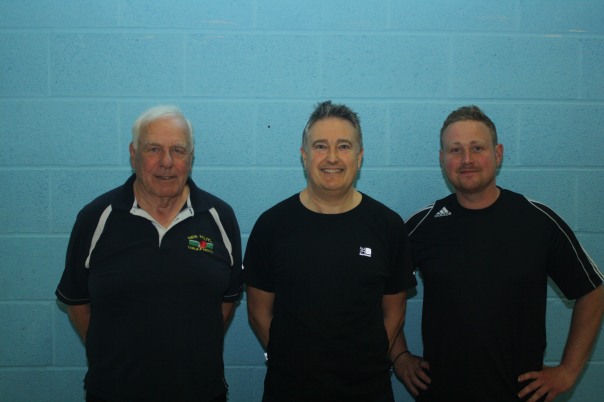 ← G TEAM WIN DERBY TO GO THROUGH TO PLATE FINAL
IT WAS ALRIGHT ON THE NIGHT FOR NEW MILTON PLAYERS! →