← HONOURS EVEN IN DIV 3 DERBY
DELIGHT FOR NEW MILTON D! →

In a week in which the New Milton Table Tennis Club could only muster three wins out of ten matches in the Bournemouth & District league, the club’s two teams in Div 2 were both involved in 10-0 whitewashes; one for, one against.

The C team dished it out to basement boys North Bmth B in their own back yard at the Winton YMCA thanks to hat-tricks from brothers Simon & Peter Daish and Graham Underwood who was playing up a division. The brothers Daish combined well in the doubles to pile on the agony and beat the North pairing 3-1 to complete the rout. This did their clubmates in the second from bottom D team a great favour as they prevented North from gaining ground on them.  A picture of a triumphant Simon Daish appears below:- 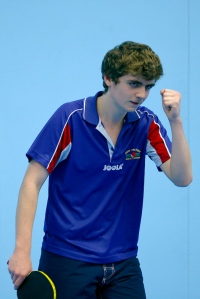 The D team (Chris Pusey, Bob Fagan & Roy Hobbs) were unlucky in their 0-10 defeat against Merton F as all three of Pusey’s games went all the way to five ends without reward. He had only just lost to Merton’s Russell Yearworth 9-11 in the final singles of the evening when he joined with Fagan to try to get something out of the doubles. They just lost the first set 10-12 then won the second 11-9. Things looked promising when they pipped the third 12-10, but then narrowly lost the fourth 9-11 to take it right down to the wire to spare the blushes. Unfortunately Milton ran out of steam in the fifth and final set to lose 5-11 to tormentor Yearworth & Ryan Pickup. Full results details are below:-

New Milton A 3 Bmth Sports A 7

← HONOURS EVEN IN DIV 3 DERBY
DELIGHT FOR NEW MILTON D! →