← A TEAM’S CUP PLAN COMING TOGETHER!
MANY HAPPY RETURNS FOR NEW MILTON A! →

In the final week of the first round of matches in the Bournemouth & District Table Tennis league, the New Milton Club came up with five draws out of their ten matches. Three of the matches had a 10-0 scoreline with only one of its teams coming out on the wrong side of a whitewash.

Div 2 saw the D team (Terry Jenvey, Chris Pusey & Malcolm Floyd) hold leaders Bmth Sports H to a hard-fought 5-5 draw in their own back yard. Pusey bagged a brace including a fantastic win over the previously unbeaten Jordan Pang. Having received some stern coaching from father David, young Pang went on to narrowly beat captain Jenvey 11-9 in their fifth and final set and then Floyd over four sets. With another brace from Floyd and one win from Jenvey, Milton needed the doubles to become only the second side to beat the leaders. Jenvey and Pusey went 2-1 up against Bourne captain Gavin Coppard and Walid Ashour but the Milton pairing faded in the final two sets to have to settle for a still creditable draw.

Impressive new signing Liam Iliffe (pictured below) marked his league debut with a magnificent brace for the G team in their 5-5 draw against Merton H in Div 3. Iliffe’s father Paul was voted Milton’s most improved player last season and now Liam looks to be blazing his own trail. 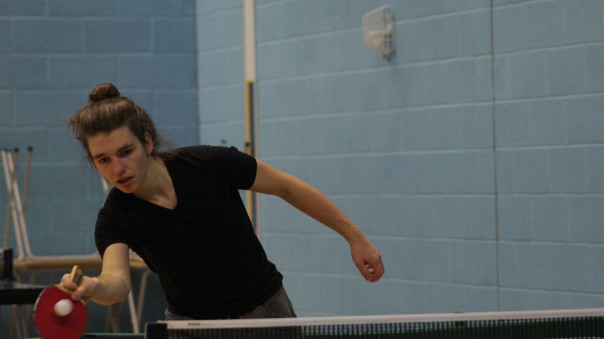 Div 4 saw the H team hammer basement boys Bmth Sports M 10-0 thanks to hat-tricks from Lewis Reading and Eddie Tompkins, their first of the season, and yet another treble from Dave Sutton. In Div 5, the K team were awarded their 10-0 victory aganst bottom-dwellers Parkstone who were unable to put out a team. Also in Div 5, the L team (James Harper, Stuart Burton & Maggie Brown) lost 0-10 to runaway leaders Winton YMCA E. Full results are below:-

Ringwood A 4 New Milton A 6

New Milton B 5 Winton YMCA A 5

(Parkstone were unable to put out a team)

← A TEAM’S CUP PLAN COMING TOGETHER!
MANY HAPPY RETURNS FOR NEW MILTON A! →