← MANY HAPPY RETURNS FOR NEW MILTON A!
DOUBLES DECISIVE FOR NMTTC PLAYERS →

19 members and guests of the New Milton Table Tennis club attended their annual Christmas Party at the Carpenters Arms on Friday 9th December and a good time was had by all.  Many favourable comments were made about the quality of the food and the speedy service and these were passed on to Lynn, the landlady.  This year the fun raffle was in aid of the Oakhaven Hospice Trust, the prizes being donated by club members, and £80 was raised which is a club record.

Club Secretary Bev Scott-Johns (pictured below) summed up the club’s past year in his traditional after-dinner speech which appears in full below:- 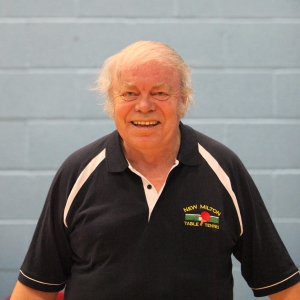 First of all I would like to welcome and say thank you to everyone for coming to our Christmas Party tonight. The attendance this year is excellent considering that the details were only sent out recently.

The previous Christmas Party was held just under a year ago on the 16th December 2015. The last twelve months have been a mixture of some success for our club’s teams and players and personal sadness for Bob Fagan, Sylvia Smith and myself. I am very pleased that Bob after losing Sandy last year and Sylvia after recently losing her mother, both felt able to join us tonight. I lost my wife Valerie to Myeloma in March and I am grateful for all the sympathy cards, messages and donations to the Oakhaven Hospice which were received from members of the table tennis fraternity. This was much appreciated by my family and myself.

Turning to the New Milton Table Tennis Club. We are now in our 3rd season at the Grange School and our 14th season at Mudeford Wood Community Centre. Attendances have continued to hold up well at the Sunday club night. We frequently have visiting players from Christchurch, Southbourne and Bournemouth as well as Highcliffe, New Milton and Lymington.

At the conclusion of the 2015/2016 season, New Milton A were Runners-Up in the Premier Division and New Milton F were Champions in Division 4. The F Team were also runners-up in the Final of the Times & Directory Cup. New Milton G won the Final of the Times & Directory Plate. In the Individual Tournaments Steve Cheesman won the Division 4 Event; Matthew Daish won the Premier; Doug Gerrish won the VET 50+ while Steve Hemmings was runner-up in three separate events.

In the 2016/2017 season New Milton H is currently in second place in the latest league table while New Milton C and K are both shown as being in third place. New Milton TTC entered 11 teams in the Bournemouth League this season, one more than last year. We also entered two teams in the Poole Pairs League which is played at the Grange School on Wednesday evenings. Unfortunately at the present time we have more than ten injured or incapacitated players and this is very challenging for our team captains.

A new club trophy was purchased during August which is called the Sandy Fagan Memorial Trophy, in memory of our former club secretary and wife of Club President Bob Fagan. This trophy was presented to the team winners of the summer pairs competition held at Mudeford Wood in early September.

I was nominated by Malcolm Floyd and Steve Hemmings for the Table Tennis England “Volunteer of the Year” award. I was very pleased when this award was presented to me at a recent club night. A considerable amount of work was completed by Malcolm and Steve when making the application to the national governing body.

It only remains for me to wish everybody a happy and peaceful Christmas and my best wishes for the New Year.

The club is always on the lookout for new members (especially with our current level of incapacitated players), from experienced players to absolute beginners.  Anybody interested in joining our very friendly club should contact Bev on 01425 619552.

← MANY HAPPY RETURNS FOR NEW MILTON A!
DOUBLES DECISIVE FOR NMTTC PLAYERS →