The Club is delighted to announce that it has achieved Clubmark Re-Accreditation after six weeks of hard slog led by Club Treasurer & Press Officer Malcolm Floyd.

It shows that a Club provides the right environment which ensures the welfare of members and encourages everyone to enjoy sport and stay involved throughout their lives. It means that parents can rest assured that their children will be in a safe environment within a well-managed club. Another benefit of Clubmark is that many funding bodies state that applicants must have the accredition to be eligible for funding support.

The Club was congratulated by Table Tennis England, its National Governing Body, for the high quality and speed of its submission. We think that 6 weeks must be some kind of a record, but this is yet to be confirmed by Table Tennis England.  Malcolm would like to thank the officers and committee members for their help and support in this magnificent achievement, particularly club chairman Steve Hemmings.

The Club initially acquired the prestigious Clubmark status in August 2010 and gained its first re-accreditation in March 2014. We have just found out that accreditation now only last two years instead of three years, which reflects the increasingly higher standards expected from clubs.

In addition to being an “Ability Club” (Actively working with disabled people), the Club is also a 4-Star Premier Club, the highest rated club in the Bournemouth & District league. Clubmark accreditation is mandatory to achieve a star-rating.

We are always on the lookout for new members, from experienced players to absolute beginners, but would particulary like to attract more junior and lady members. Anybody interested in joining our very friendly club, or who would just like a bit more information, should contact Club Secretary Bev Scott-Johns on 01425 619552.

The Club’s hard-earned certificate appears below:- 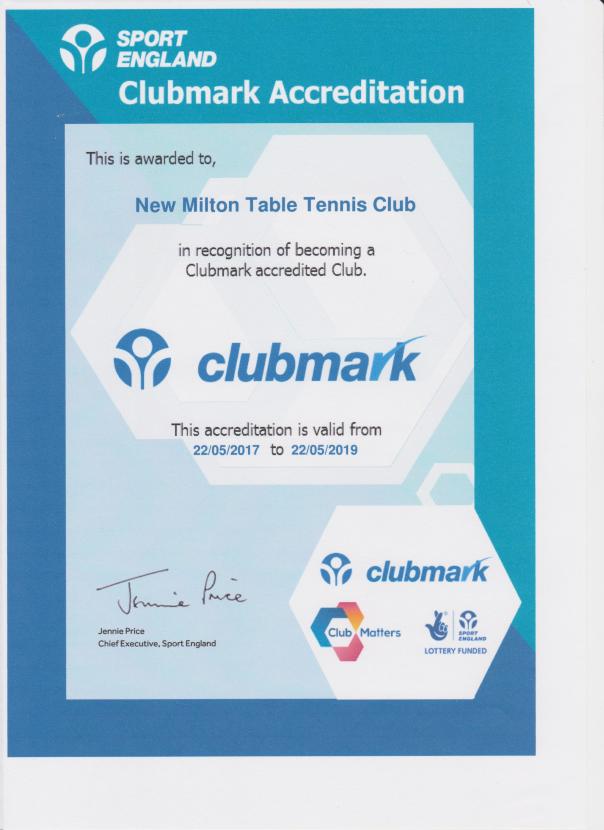