Bev was delighted to report that club members had come away with a club record haul of trophies from the annual Bournemouth & District Individual Championships (9 titles and 4 runners-up). England Veteran Brian Bickell won the Vets 60+ and Vets 70+ titles, and Gerard Redman and Steve Hemmings took the Vets 40+ and Vets 50+ titles respectively. Jack Trafford won the Junior Under 15 title and came runner-up in the Junior Under 18, Bournemouth Handicap and Div 2 events. Andy Tipsana, Ben Greene and Adam Titcombe won the Div 1, Div 4 and Div 5 titles respectively. Steve Cheesman beat clubmate Graham Underwood to take the Div 3 title.

Two of the club’s teams gained promotion in the Bournemouth & District league: Les Smith’s H team won Div 4 and Graham Underwood’s G team came runners-up in Div 3. Unfortunately, John Millward’s B team and Terry Jenvey’s D team ended up in the relegation zones of the Premier and Div 2 respectively. The G team were runners-up in the Times & Directory Handicap Plate.

Bev mentioned that a considerable number of spectators attended the Grand Finals Night of the club’s annual Internal Championships, with Ben Greene having made it through to three of the finals (full listing of winners and runners-up appears below).  Bev thanked all those who took part and assisted him with the administration of the tournaments.  Pictured below are the trophy winners at the Presentation Evening, flanked by Bob Fagan (Club President) on the left and Steve Hemmings (Club Chairman) on the right. 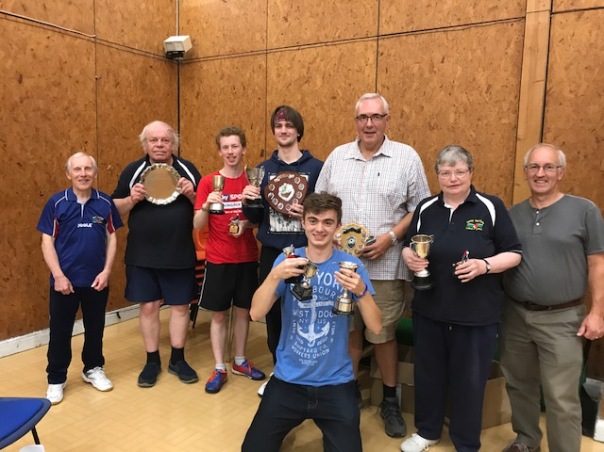 Bev reported that club membership continued to rise and also pointed to the continued success of the club nights at the Grange School, Somerford. The number of teams entered into the league increased from 10 to 11 teams, and it is hoped to enter 12 teams into the league next season.

Bev was also very pleased to report that the club achieved its prestigious Clubmark re-accreditation, thanks largely to the efforts of Club Treasurer & Press Officer Malcolm Floyd. Chairman Steve Hemmings paid tribute to Malcolm’s efforts, adding that the re-accreditation was achieved in record time, with Table Tennis England commenting on the quailty of the submission. Clubmark stands for higher standards of welfare, equity, coaching and management in community sports clubs. An accredited club is recognised as a safe, rewarding and fulfilling place for participants of all ages and abilities, as well as helping parents and carers know that they are choosing the right club for their young charges.

Club Treasurer Malcolm Floyd presented the Annual Accounts which showed the club to be in a very healthy financial position, which meant that the membership fees did not need to be increased for next season.

With the official business out of the way, Club President Bob Fagan presented the club’s annual trophies, ably assisted by chairman Steve Hemmings who had procured the trophies. After the presentation of the annual tournament trophies (listed below), the winners of the two annual discretionary trophies were announced:-

The James Lewis Shield for Most Improved Player was awarded jointly to Jack Trafford and Ben Greene as the committee found it impossible to choose a winner. 14 year old Trafford has been dedicated to his coaching and has consequently developed very quickly this year. This has culminated in considerable success in the league tournaments and his recent first win of a 2 star tournament. The other contender, Greene who played in Div 4 last year has also made dramatic progress this year, seemingly improving on a weekly basis. He also achieved great success at both the league and club competitions.

The Doris Marshall Memorial Plate for Club Person of the Year was unanimously awarded to Secretary Bev Scott-Johns for his outstanding contribution to the running of the club. This aligned nicely with Bev winning Table Tennis England’s Pride of Table Tennis Award back in November last year.