First up was the Ladies Handicap Singles Final, which was the one and only match in this event as there were only two entrants, Sylvia Smith and Lynn Willrich. Willrich was out for revenge as she lost to Smith in last year’s final and was determined to capitalise on her +5 start. She came out with all guns blazing but Smith caught up at 15-15 only for her to fade and lose it 19-21. Willrich really started to believe and carried on with her outright attack to win the second 21-17 to reclaim her trophy from two years ago.

Next up was the Under 40s Handicap Singles between Kai Major and Michael Kominek. Kominek had a +10 start and completely overwhelmed Major to take the first set 21-6. Major recovered some composure to take the second 21-16, but Kominek wasn’t having any more of that and took the decider 8-21.

The Over 40s Handicap Singles was the first of the two finals between Stuart Burton and Plamen Petrov. Burton had a start of +11 but Petrov’s clever combination play proved too much for him and won it 21-19, 21-17.

To give Burton and Petrov a break between their next contest in the Handicap Singles Final, an Exhibition Match was staged between Matt Daish and Jack Trafford. This was a repeat of the Junior Singles Final which was held earlier on 10th May and the same outcome with Daish winning in two straight sets. Club members don’t often get the chance to see 17 year old Daish in action these days as he now plays in the German league. Next season he will playing in the Oberliga having recently signed for TTG Neckarbischofsheim based near Stuttgart. Trafford was voted the club’s joint most improved player last season and achieved an impressive 65% winning average in his first season in the Premier of the Bournemouth & District league.

The Handicap Singles Final had an air of inevitability about it as Petrov once again proved too much for Burton and won it again in two straight sets, 21-15, 21-17.

Petrov (pictured below) was looking for his third title of the evening as he and Sid Daynes took on Krzysztof Skwarek & John Parkhouse in the Doubles Final. Petrov and Daynes seemed to gel better than their opponents, and benefiting from a small +3 start they won it 21-14, 21-18. 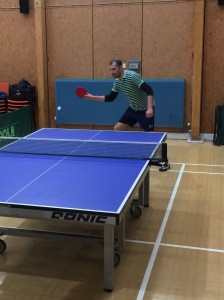 Petrov looked like landing his fourth title as he won the first two sets against 15 year old Jack Trafford in the Open Singles Final 11-8, 11-6, mainly by effectively blocking Trafford’s forehand loops. However, the teenager sneaked the third set 12-10 and then the fourth more convincingly at 11-6 to set up the decider. Trafford was determined not to let Petrov back in the game, and with much more varied serves and attacking strokes he won it decisively 11-3.