The New Milton Table Tennis Club teams won four out of their eight matches in the Bournemouth and District league last week, three of them representing reversals of first round defeats. In the Premier, the A team beat Merton A 7-3 in their own back yard having lost 4-6 at home, and at the opposite end of the league in Div 5 the K team beat Bmth Sports S 8-2 having lost 3-7 first time around. The biggest turn-round came in Div 1 as captain Shaun Newcomb’s hat-trick helped his B team to beat Lynwood B 7-3 at home having lost 1-9 to them down at Parkstone.

Div 2 saw the C team (pictured below) gain more ground on their E team as the C’s improved on their first round 7-3 win over Merton D with an 8-2 victory chez Merton. The E’s promotion prospects took a bit of a tumble as they lost again to Merton E, this time by 3-7 at Mudeford Wood. For the first time this season, the E team drop out of the top two to be replaced by their victors Merton E. Things got even worse for the E’s as Lynwood C had to concede their match against Bmth Sports F which reinforced Bourne’s title claims thanks to the gifted four points. 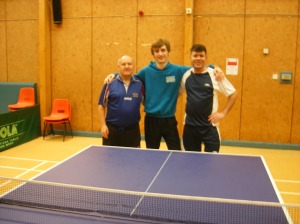