The New Milton Table Tennis Club won four out of their seven matches in the Bournemouth and District league last week, one of the wins coming at the expense of one of their own teams in a local derby.

The most impressive win came in the Premier league as the B team whitewashed basement boys Broadstone A 10-0 down at Mudeford Wood Community Centre. Shaun Newcomb (pictured below) and John Millward scored their first hat-tricks of the campaign, John Hook came up with his third treble then Newcomb hooked up with Hook to take the doubles in three straight sets to complete the rout. 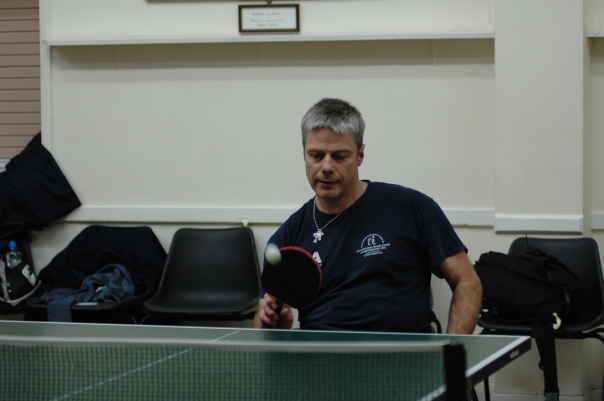 Div 5 saw the next best result as the J team beat new boys on the block Elec-trick by 9-1 in their own back yard. Captain Malcolm Douglas led from the front with his first hat-trick of the season, Richard Brockbank did likewise and new signing Mike Gent bagged a brace.

The H team’s unbeaten run in Div 4 came to an end as they were beaten 7-3 by their F team (pictured below l-r Captain Malcolm Nash, Sylvia Smith & Steve Cheesman) who maintain their 100% record. Impressive new F team signing Steve Cheesman remained unbeaten to win his third hat-trick, captain Malcolm Nash bagged a brace and Sylvia Smith chipped in with the one win. There was nothing on the doubles, but they were played as if there was as Cheesman & Nash beat Elliot Storr-Smith & Paul Iliffe over five sets.

The club’s other win came in Div 2 as the E team beat the table-topping Broadstone D team by 6-4 down at Mudeford Wood. Simon Golding was on fire as he came up with his third hat-trick of the season, only dropping one set the entire evening. Teenager Peter Dash added to more to the tally then paired with Golding to take the doubles to secure the victory. Full results details are below:-

Winton YMCA A 8 New Milton A 2

New Milton B 10 Broadstone A 0