MIXED BAG OF CUP RESULTS FOR NMTTC (T&D ROUND 1)

There was a break in the Bournemouth and District Table Tennis league with play given over to Round 1 of the Annual Times and Directory Handicap Cup competition last week. The New Milton Club had six teams playing in this round and emerged with four wins and two defeats.

Both the E and F teams had won their Preliminary Round matches and did likewise in Round 1 to go through to the next round. The E team took on Div 2 fellows Merton G and beat them by a comfortable 5-1 away at Southbourne (the E team’s Bev Scott-Johns (captain) and Clive Pitts are pictured below), but the F team from Div 4 had the more emphatic 7-0 victory against Div 1’s Bmth Sports C home at Mudeford Wood. The F’s Steve Cheeseman and Ian Linney have carried their unbeaten league form into their cup matches and Mike Roberts scored a hat-trick on the night. 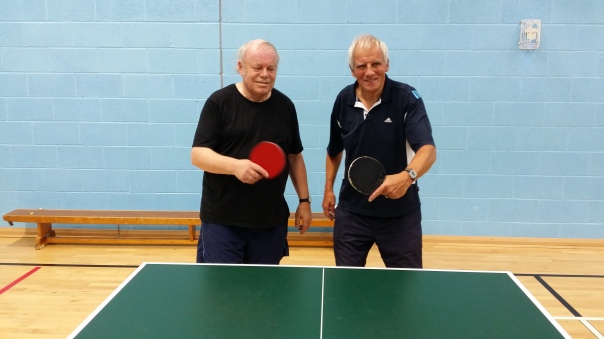 The B, D, H and K teams all had byes through to Round 1, but only the H and K teams managed to win through to Round 2. The H team, who normally ply their trade in Div 5 took on Div 1 high-flyers Ringwood A and beat them 6-2 home at the Grange, Somerford, aided and abetted by an impressive hat-trick from Paul Iliffe. Also at the Grange, the K team entertained Div 5 fellows Shamrock C and beat them 6-3 courtesy of a brace apiece from captain Stuart Burton, John Parkhouse and Andrew Stainton.

The Premier’s B team took on a team from the opposite end of the league in Div 5, Winton YMCA D and were comprehensively beaten by 1-8. It was all over at 0-5 but John Hook avoided the whitewash by beating Winton’s star player Matt Ryan in two straight sets.

Div 1’s D team struggled with the handicaps against Bmth Sports H (Div 3) as they lost 1-7 away at Chapel Gate, captain Terry Jenvey picking up the consolation for Milton. Malcolm Floyd came close to adding one more to the scorecard as he caught up at 19-19 in the final set against Bourne’s John Crockett. However, Crockett then got a vicious net cord to make it 20-19 and then won the next point to deprive Floyd of a personal consolation.

The losing B and D teams live to fight another day, however, as they join their A and G teams in the consolation “Plate” competition which will be played Week Commencing 18th January 2016. Full result details are below:-