← DOUBLE DERBY DELIGHT FOR NEW MILTON F!
BICKELL BACK IN ACTION FOR NMTTC! →

The New Milton Table Tennis Club came up with four wins out of eight matches in the Bournemouth and District league last week, one of them coming at the expense of one of their own teams in a local derby.

In their Div 2 derby first time around, the struggling D team managed to take a point off their clubmates in the E team when they lost 4-6. However, the E’s fielded a stronger team this time (Simon Golding, Simon Daish & Peter Daish) and demolished their D team (Chris Pusey, Terry Jenvey & Roy Hobbs) 10-0. The Dees needed the doubles to avoid the whitewash and indeed Pusey & Jenvey took the first set 12-10 only narrowly to lose the next two 11-13, 11-13. They scraped the fourth set 12-10 but just ran out of steam in the decider to go down 6-11.

The other scheduled derby between the A and B teams in the Premier league had to be abandoned because Bees John Hook injured himself in the knock-up necessitating an ambulance. The match will have to be rearranged.

The club’s other three wins were all 8-2 maximum pointers. In Div 1, the C team (Paul Iliffe, Frank Handy & Rob Blackmore) repeated their first round scoreline against second from bottom Bmth Sports F. Captain Handy (pictured below) led from the front with his second hat-trick of the campaign and Iliffe and Blackmore bagged a brace apiece. 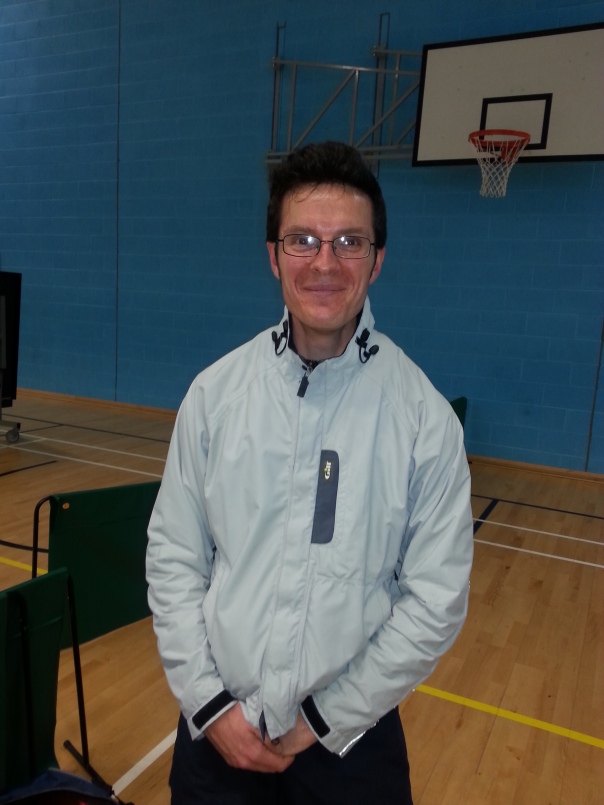 Div 3 saw the other two 8-2 scorelines. The F team (Sylvia Smith, Mike Roberts & Steve Cheesman) improved on their first round draw against second from bottom Nimrod A in their own back yard this time. Cheesman came up with yet another hat-trick and Smith and Roberts won a couple each.

The G team (Mike Toole, Graham Underwood & Dave Sutton) overturned their first round 4-6 defeat against Bmth Sports K thanks to hat-tricks from new signing Toole and Sutton who was playing up a division. Captain Underwood chipped in with the one win and joined with Toole to take the doubles to make it 8-2.

Sutton deserves a special mention as the previous evening his hat-trick for his own H team in Div 4 helped them hold second from bottom Nimrod B to a 5-5 draw at Mudeford Wood. Sutton has only dropped one game for his own team so far this season.  Full results appear below:-

← DOUBLE DERBY DELIGHT FOR NEW MILTON F!
BICKELL BACK IN ACTION FOR NMTTC! →