The New Milton Table Tennis Club came up with five wins out of twelve matches in the Bournemouth and District league last week. The heaviest of the club’s seven defeats came in the Premier as a weakened A team were drubbed 10-0 by Bmth Sports B down at Mudeford Wood Community Centre.

Only two of the club’s teams have won all of their three matches. In Div 2, the F team (Malcolm Floyd, Ben Greene & Terry Jenvey, pictured below) travelled to deepest darkest Broadstone and came away with a 7-3 victory over Broadstone C. Greene came up with his first hat-trick of the season for his F team, Floyd got his season off to a good start with a brace and Jenvey played up a division to chip in with the one win. There was nothing on the doubles but Greene and Floyd combined clinically to blow the surprised Broadstone pairing away in three straight sets. 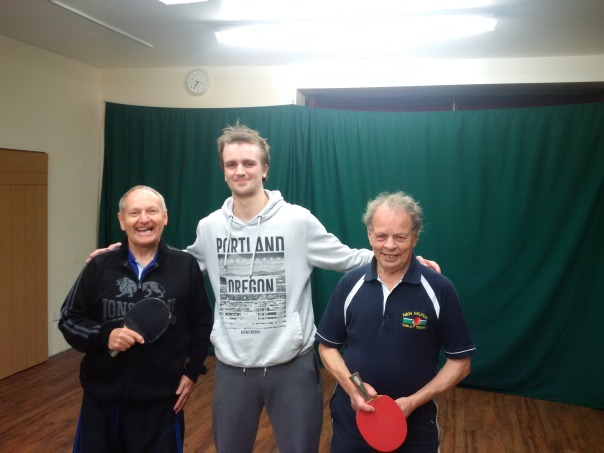 The relegated G team (Chris Pusey, Terry Jenvey & Dave Cuddon) want to bounce straight back to Div 2 and served further notice by beating Winton YMCA C 6-4 at Mudeford Wood. Pusey came up with his second hat-trick of the campaign, Cuddon returned from a season’s lay-off to bag a brace and captain Jenvey added one more to the tally.

Div 2 also saw the E team (Andrew Daish, Simon Golding & Bev Scott-Johns) come up with their first win of the campaign via a 6-4 victory over Bmth Sports G at Mudeford Wood. Daish and Golding won two each and captain Scott-Johns played well to beat Bourne’s very steady Simon Marriner. The doubles were needed for the precious win and Daish & Golding duly obliged after losing the first set. Full results are:-

Bmth Sports A 6 New Milton B 4