New Milton Table Tennis Club came up with five wins out of nine matches in the Bournemouth and District league last week, one of them coming at the expense of one of their own teams in a local derby.

The H team (Sylvia Smith, Dave Sutton & Lewis Reading) lost their first derby against their G team in the first match of the season in Div 3, but they managed to beat their J team (Thomas Daish, Adam Titcombe & Mike Roberts) 6-4 last week. Following an excellent hat-trick from Sutton the H team needed the doubles to clinch victory, and Sutton joined with pal Reading to see off Daish & Roberts in three straight sets.

The two teams which were relegated last season are putting in a determined effort to bounce straight back up again and both these teams won last week. The G team (Chris Pusey, Terry Jenvey & Bob Fagan) are top of Div 3 and took maximum points off Merton G in an 8-2 win at Mudeford Wood. Pusey came up with his third hat-trick of the campaign, and captain Jenvey just missed out on joining him in a treble as he lost 10-12 to Merton’s Russ Smith in the fifth and final set. A rejuvenated Fagan also bagged a brace and then Pusey & Jenvey blew the Merton pairing away in the doubles to continue their impressive start to the season.

Div 1 saw the relegated C team (Shaun Newcomb, Steve Cheesman & Ben Greene) take maximum points off the struggling Lynwood B by beating them 8-2 in their own back yard in Parkstone. Cheesman (pictured below) played up a division and won his second hat-trick at the higher level, but stand-in captain Newcomb and Greene (Cheesman’s team mate in Div 2) both lost to Lynwood’s very steady Alan Smith so had to settle for a brace apiece. The doubles were needed for the four points, and Greene combined intelligently and nimbly with wheelchair player Newcomb to demolish the Lynwood combo in three straight sets. The C team are now only deprived of second spot by Bmth Sports D on games difference. 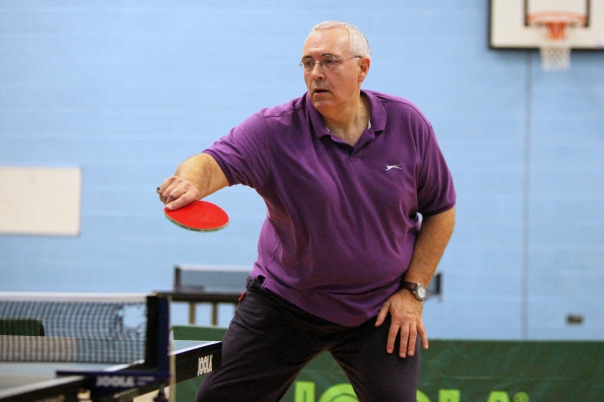 However, Milton’s best win of the week came in Div 2 as the E team (Simon Golding, Simon Daish & Svet Ignatov) hammered struggling Broadstone D 9-1 at Mudeford Wood courtesy of hat-tricks from Daish and Ignatov and a brace from Golding. The E’s are neck and neck with their F team at joint fourth place in the league table on 14 points and identical games difference. The F’s (Steve Cheesman, Malcolm Floyd & Ben Greene) lost 3-7 away at Breamore but it could have been oh so different as five of the lost matches went all the way to five sets, three of them being lost 9-11.  Full results details appear below:-

Broadstone A 5 New Milton B 5