The New Milton L team was the only team from the New Milton club in action in the Bournemouth and District league last week, and they ended up in second place in Division 5 for their efforts in their last match of the season.

Last week’s team was Paul Owen, Geoff Biggs, Keith Kensley and Captain Mike Melaniphy (fourth man), and they took maximum points off Bournemouth Sports P by beating them 8-2 in their own back yard. Owen came up with his second hat-trick of the campaign and was joined in his treble by Biggs, his fifth of the season. Kensley only just missed out on his own hat-trick by losing to Luke Crisp in 8-11 in the fifth and final set. There was nothing on the doubles but Meliphany and Kensley certainly played as if there were, albeit losing by 3-1.

Milton’s performance against the Bourne side reflects their marked improvement in the second half of the season where they doubled their tally of wins. They lost to the Bourne 4-6 in their first encounter, beat them in their second 6-4, then improved on that with their final 8-2 victory. They also claimed bragging rights over their club mates in the M team as they won their last two encounters 8-2 having lost their first derby clash 4-6. 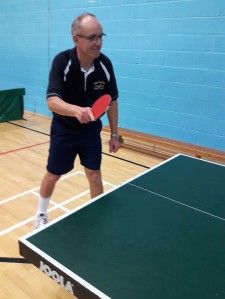 Paul Owen (pictured above) deserves a special mention in despatches having only returned to table tennis this season after a 46 year break. All three of his opponents were above him in the winning averages, and Owen ended up with a very creditable 52%. His performance last week was all the more remarkable considering it was his first match with his new bat! Also sharing in the glory were the other two squad members Malcolm Douglas and Chris Courage, both of whom put in some very creditable performances during the season.