In the Annual Times and Directory Handicap Cup Final, New Milton J represented by Plamen Petrov, Mike Roberts (captain) and Adam Titcombe (team pictured below) had a really tough task on their hands against Winton YMCA F (Peter Baggs, Yari Troschey and Michael Kominek). In the Bournemouth & District league, the Milton team ended up comfortably mid-table in Division 3 while Winton were run away leaders of Division 4, so it made for a very tight match. Being new to the league with unknown form it’s fair to say that Troschey’s and Kominek’s handicaps were generous as indeed was Petrov’s for New Milton. 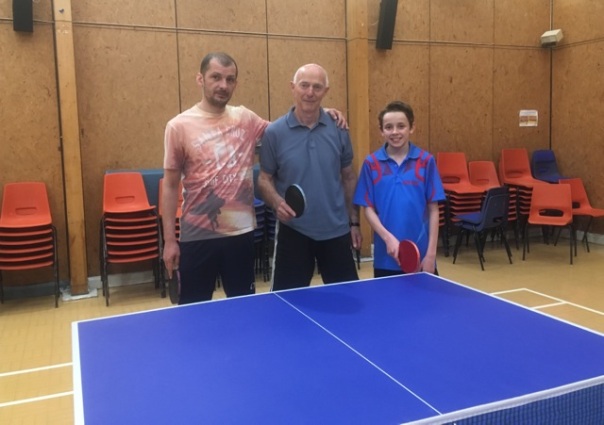 Petrov literally got the ball rolling as he quickly overhauled Baggs’ +4 start to win the first match of the evening comfortably in two straight sets 21-12, 21-15. Next up was 14 year old Titcombe against the very awkward pen-holder Troschey who was second in the winning averages in Division 4. It was virtually a “scratch” match as Troschey had a +1 start and Titcombe did well to keep in touch during the first set albeit narrowly losing 18-21. The second set was a completely different matter as Troschey kept catching the Milton youngster out of position to win 21-9 to make it 1-1.

Captain Roberts had to give away a +2 start to Kominek who is top of the Div 4 winning averages, and this match was the first to go all the way to three sets. Roberts drew first blood against the much more orthodox Kominek by taking the first set 21-16 but then seemed to lose his way to drop the next two 13-21, 11-21 for Winton to lead 2-1. In another three-setter, Petrov gave away a +4 start to Troschey and lost the first set 16-21, but caught up at 8-8 in the second to eventually win it 21-17. During the decider, Petrov’s serve was called out by the opposition but this seemed to disturb Troschey more than Petrov who seamlessly corrected his serve. Troschey led 20-19 with 2 match points but Petrov won the next two points to restore parity at 2-2.

In the fifth match, Roberts took the first set off Baggs 21-16 having conceded a small +1 start. It was in the second set that Roberts truly displayed his captain’s mettle as he recovered from going 12-18 down only to sensationally come back to win 21-20 to give Milton the lead 3-2. In their “scratch” match, teenager Titcombe quickly seized the initiative and comprehensively beat Kominek 21-12 in the first set but went on to lose the next two 16-21, 15-21 to make it 3-3.

Next up in this thrilling nail-biter, captain Roberts (+1) heavily lost 10-21 to Troschev whom he found very awkward with his pen-holder drives down both wings. Roberts recovered well to take the next set 21-19 having worked the Winton man out and with the benefit of a late lucky net cord and an “edge”. It was nip and tuck throughout the decider but Troschev started hitting again and won 21-15 for Winton to take the lead 4-3.

Milton had to win the next match to avoid crashing out of the Cup and up stepped Petrov against Kominek receiving a +3 start. Petrov really didn’t get into his stride in the first set and lost 11-21 with things looking really bleak for Milton. It looked even bleaker as Kominek had three championship points at 21-19 but Petrov won the next two points to save the match. The deciding set was a much more different matter as a slightly deflated Kominek was making more unforced errors, with Petrov winning quite comfortably 21-11 to set up a thrilling decider at 4-4.

They say “cometh the hour, cometh the man” and it was on young man Titcombe’s shoulders to beat Baggs who was playing off +1. Up stepped the teenager who seemed completely unfazed by the pressure, displaying a maturity and resolve far beyond his tender years. As the decider got under way, the outcome was never really in any doubt as the much more agile youngster took the first set 21-14 then did likewise in the second to land the Cup for his team. All in all, a thrilling and entertaining Cup Final played in a very friendly, competitive and sporting manner, a brilliant advert for the sport of Table Tennis. And for young Titcombe, the world is his oyster!

Good news also from the New Milton M team (Captain Stuart Burton, Taki Hall & Maggie Brown) who beat Merton F (Dave Chapman, Steve Martin & Norma Millward) 5-4 in their Plate semi-final. Hall scored a hat-trick and Burton bagged a brace, and Brown almost added one to the tally but just lost 20-21, 20-21 to Steve Martin. It could so easily have gone the other way as Burton lost the first set of the decider against Steve Martin 16-21, only to rally and take the second fairly comfortably by 21-13. It was nip and tuck throughout the deciding set but Burton just edged it 21-19 to take his delighted team into the Plate Cup Final.